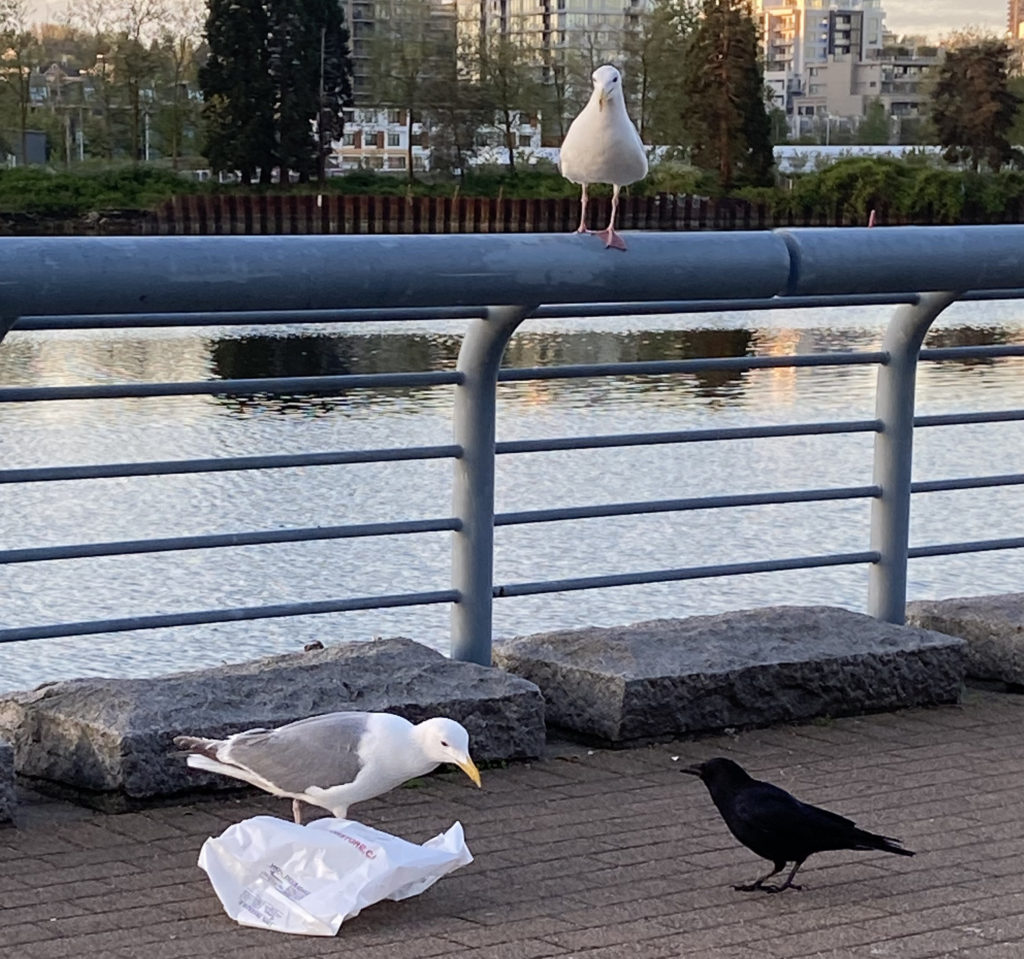 Three feet away, Crow cocks its head and looks at me. He clearly disapproves of my choice of bench.

“Can’t you see that I’m working here?” He seems to say.

After a tense staredown, he decides I’m not much of a threat and goes back to work.

Just peeking out of the trash can is a plastic bag; this is the prize. Beak to bag, turn head, step back, step on bag, release beak from bag, grab hold farther down, repeat. It’s slow, tedious work, but clearly, Crow is familiar with garbage can extraction techniques. I’m impressed. He’s making arms, hands and opposable thumbs look overrated.

Soon the bag is on the pathway.

Why? I ask myself, are you so interested in an empty B.C. liquor bag?

The answer comes, Crow uses his beak to open up the white plastic. At the bottom, I see what motivates this little black innovator to such zealous industry. There seems to be a trace amount of what looks to be the final remnants of potato chips.

But the bounty is yet to be harvested. How does a winged creature crawl inside a plastic bag? And is that even a good idea? No, no, it’s not. In a bolt of genius, the solution presents itself. I can see the lightbulb come above Crows head as he hops into position at the bottom of the bag. Why not dump out the contents? Yes, Yes, this is the solution! Crow grabs the bag, arcs his head up as high as it will go, and stands on his tippy-talons — it’s working! The chip fragments tumble forward. The crow releases his grip to rotate the bag and finish the job, but just as he does, a gust of wind comes along, and away goes the bag down the sea wall path. I can almost hear Crow cursing as he hops double-time to catch up to his breakfast. A well-placed talon stops the escape. Crow pauses to revaluate; he tilts his head and peaks inside the bag. He is thinking.

Just then, a resident seagull does a fly-by loudly announcing his arrival. Seagulls are the master pirates of False Creek. Two times the size of our crow, the buccaneer swoops down to steal whatever he can. The snap of the yellow beak with the red stripe barely misses our black friend, forcing him to withdraw, while the white and grey thief takes possession of the bag, intent on snatching up all of Crows hard-earned morsels.

The gull’s head is down, reaching into the bag. Its tail feathers high in the air present an irresistible target. Crow thrusts his beak like a spear straight into the hinder parts of the gull. There is a terrific squark. Gulls’ head pops up. Partially caught on the plastic bag, the winged creature looks like he is attempting to put on a low-budget ghost costume for a Halloween party.

Crow seizes his opportunity and strikes again. Wham! After another jab or two, he attempts to de-feather the bigger bird pulling with all his might on the grey and white tail feathers. Another seagull swoops down just as Crow’s opponent frees himself. It’s two against one now, and the pirates have entirely lost their temper. Crow’s only option now is full retreat.

I swear I observe a bit of a smirk on Crow’s face as he flies off. The hungry interlopers settle in to gulp down their stolen breakfast, but there is no bountiful harvest. Crow had already seen that the fragments in the bottom of the bag were not worth the effort to get them.

I see clearly now why Crow had mischief in his eyes in defeat. He had stuck around as long as he did for one reason only. To be a pain in the ass.

PrevPreviousGunfire at my work, yet again!
NextThe Problem of Men: All We Like Ravi Have Gone AstrayNext

A Morning of Particular Magnificence

In the east, the sun creeps up on the horizon, a soft but brilliant yellow that blends gently into the blue. Not wishing to be 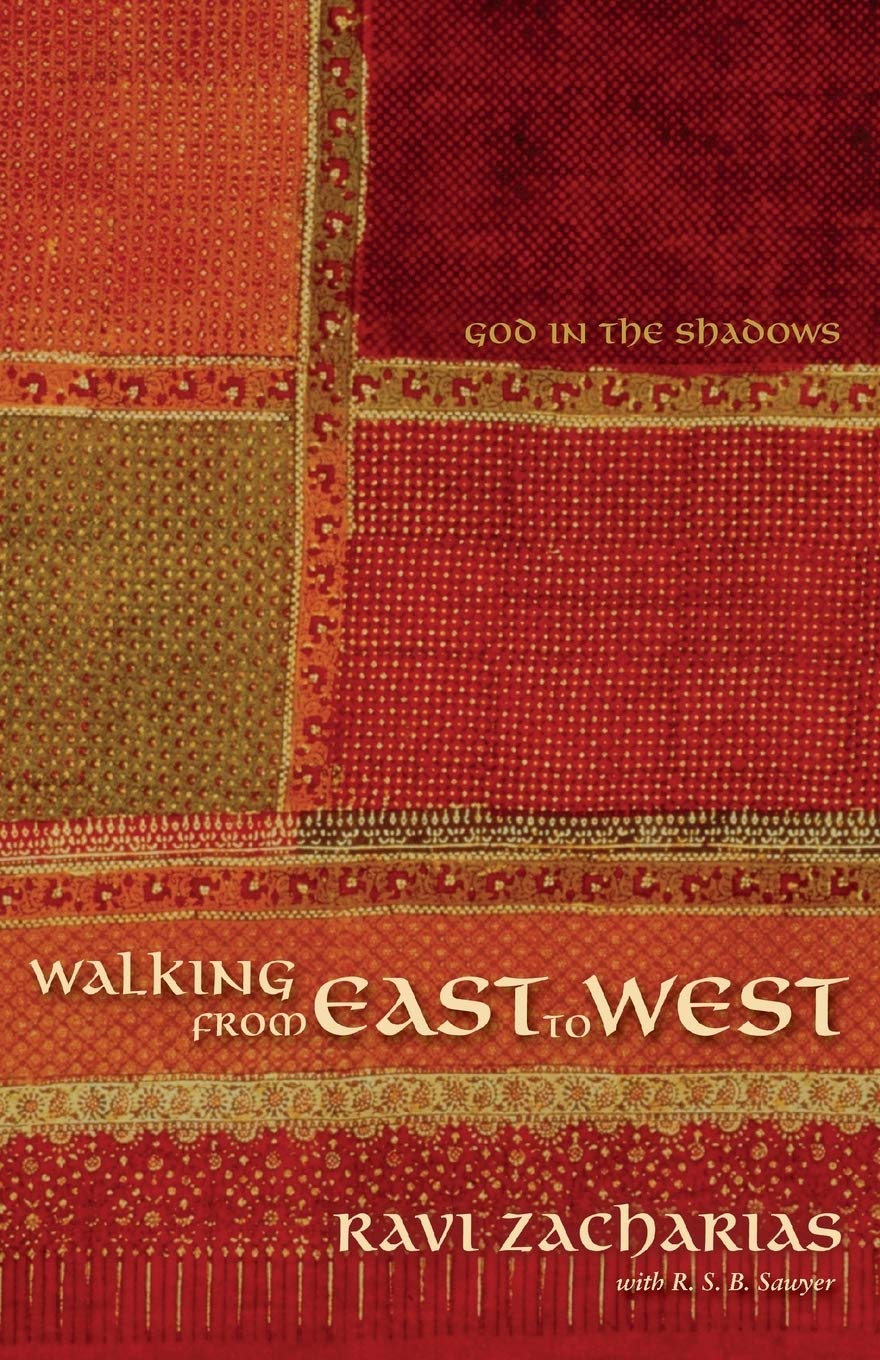